Porcine reproductive and respiratory syndrome virus (PRRSV) and influenza A virus are some of the most economically damaging pathogens of domestic swine worldwide.  The extraordinary genetic and antigenic variability of these viruses, while making them fascinating systems for studying the ecology and evolution of RNA viruses, also creates the greatest challenge to the development of effective vaccines. It is my goal to understand the immunological and epidemiological consequences of genetic diversity. I have been applying methods from the field of graph theory, commonly used in the context of computer science, physics, and operations research, to understand the viral diversity and what of that ‘diversity’ is meaningful.
Representative publications:
Anderson et al. (2012) Bioinformatics 28(12): 1624-1632.
Kamlangdee et al. (2014) Journal of Virology 88: 13300-9. 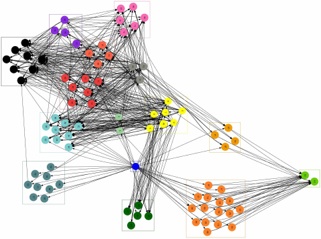 Tradeoffs between biological processes can explain individual variation in traits that are linked to fitness. In collaboration with Zach Stahlschmidt (University of the Pacific), we are investigating how multiple traits interact with one another, particularly during environmental shifts. This work was recently funded by the National Science Foundation and a few details can be found here “From complex environments to underlying mechanisms: A network approach to multi-trait tradeoffs.”
As part of this project, Dr. Zach Stahlschmidt and his lab have developed a fantastic project to describe the diversity of ants in the California Central Valley. Information on this effort can be found here: Backyard ANTology.

West Nile virus (WNV) is a zoonotic pathogen maintained in an enzootic cycle involving wild birds and ornithophilic mosquitoes.  Following its introduction to North America in 1999 the virus has spread rapidly throughout the continental United States and neighboring countries.  Working as part of a large team, in a persistent hot spot of viral amplification and human disease in suburban Chicago, we are focusing on fine-scale ecological processes that spark local transmission foci.  By embracing a complex system approach, we are describing the fine-scale interactions between the components of the vector-borne transmission system.  These relationships are likely responsible for the collective emergent behaviors we observe as large scale patterns of amplification.
Representative publications:
Hamer et al. (2011) PLoS ONE 6(8): e23767.